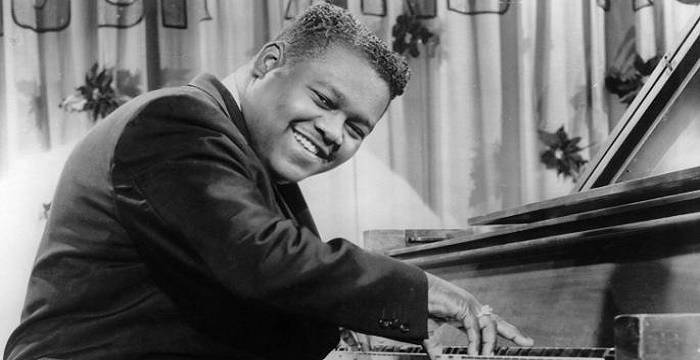 Fats Domino is known as one of the most legendary pianists and vocalists of the 1950s, having originally gotten his start in 1947. He covered a range of styles from jazz and boogie-woogie to pop, rock, country and blues. Many of his songs were written by himself and writing partner Dave Bartholomew, and often featured simple lyrics and melodies that managed to include a number of chord changes while still maintaining an overall air of simplicity. He also did a number of cover songs, although they usually maintained his general sense of musical style. It was difficult to separate the style of Fats Domino from the city of New Orleans.

His music was popular before funk really entered the spectrum, yet there was still a driving rhythm to every one of his songs. He also embodied the spirit of New Orleans jazz, able to improvise and make any song his own. In songs such as Blueberry Hill, he demonstrated his impeccable piano skills by performing rolls with both hands. While some of his songs, such as Walking to New Orleans, may still be performed in New Orleans jazz clubs today, the style with which Fats played them remains virtually inimitable. Fats Domino might not have achieved the same level of success were it not for Dave Bartholomew.

Not only was he Domino’s writing partner, but he also produced his records. When choosing which song takes he was going to put to vinyl, Bartholomew did not simply listen for which take was the most technically accurate. He looked for the takes with the best improvisation and the greatest sense of flair. He wanted people to hear Domino’s music and feel moved by it, and in this sense he was greatly responsible for Domino’s commercial and critical success. The music of Fats Domino did not just influence other musicians, but other record producers as well. Some of Domino’s later records had a unique sound due to the bassline and guitar parts, which were doubled in the recording. This would become a primary recording method for record producer Phil Spector.

Domino’s piano style was also influential, both on blues musicians with slower ballads and rock musicians with fast-paced hits such as Jerry Lee Lewis. Fats Domino showed other piano players that a musician could work the house without leaving his spot at the ebonies and ivories. His shows were long, but audiences were usually attentive throughout the duration of his sets. Not only did Fats Domino influence notable pianists such as Jerry Lee Lewis and Elton John, but a number of other musicians as well.

For instance, the song Lady Madonna by the Beatles was originally meant to showcase the influence that Fats Domino had on Paul McCartney and John Lennon. Domino’s song Be My Guest, as well as other songs in which his rhythm favored the offbeat, was influential on Jamaican musicians in the late 1950’s as they participated in the creation of ska music. Well into his 80s, he continues to inspire musicians today, playing occasional concerts around his home city of New Orleans. S hare this: