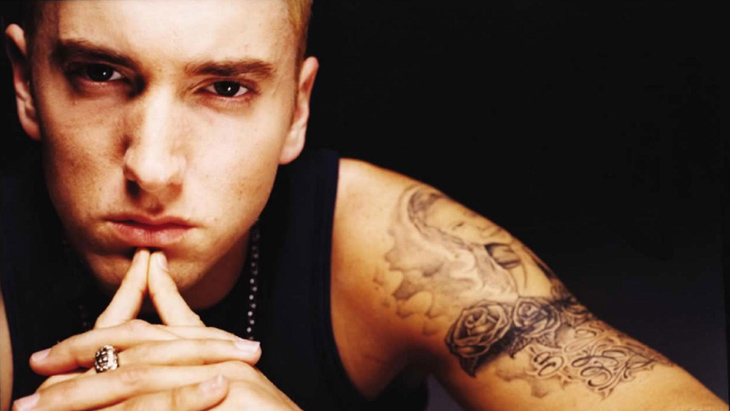 Those who have not truly listened to his music have a tendency to label Eminem as simply a white rapper, as if they somehow offers a full description of his work. It does not. Eminem has been described by Elton John (who performed rap song Stan with Eminem at the Grammies in 2001) as a true poet of his time. This is more than a simple compliment, but rather an observation of the manner in which Eminem is able to compose veritable ballads, telling complete stories within many of his raps. Eminem’s lyrics are often angry, either at those who he perceives to have wronged him or, more than slightly occasionally, at himself. He is not afraid to show his vulnerable side, relating his inner-most feelings to his audience.

He sometimes manages to do this while maintaining a sense of humor, but more than a few of his songs go deeper than any person would generally wish to go when under the scrutiny of the public. While some of his songs are humorous or are at least relatively standard fare (My Name Is,  The Real Slim Shady and Crack a Bottle come to mind), others are deeply personal stories about his troubled childhood (My Mom) and struggles with addiction (Deja Vu). Some of Eminem’s lyrics have received heat, with some pointing to the violent lyrics and potential homophobia in songs such as Criminal. He also makes tongue-in-cheek references to his own sexuality in Just Lose It.

Even so, Eminem has repeatedly said that he has nothing against homosexuals, and many artists who have worked with him have stated that it is more about shock value or making a point than it is about trying to actively offend people. Most of Eminem’s offensive lyrics are attributed to Slim Shady, his alter-ego that is generally meant to represent something much darker than himself. Various songs have referred to Slim Shady as a villain, a rapist, and a murderer. The song My Darling, which appears on the Deluxe Edition of his album Relapse, is something of a dialogue between Eminem and Satan, with the latter implying that he has control over the alter-ego Slim Shady.

Of course, it also complicates the issue with references to Eminem as Slim as well as the line All Shady is, is a bottle of hair bleach and vodka. He also mentions his real name, Marshall Mathers, in a few different songs as if it is simply another aspect of his personality. While some have stated that Slim Shady is a lazy excuse to get away with offensive lyrics, the fact that his real name is incorporated into the mishmash of personalities found within his songs indicates that Eminem is highly interested in using his songs as a means of introspection.

It can be found all over his lyrics. The song Stan looks at his relationship with his fans. The song Deja Vu examines the thought process behind his drug use and relapse. The song Lose Yourself, which is technically written to tell the story of Eminem’s character in the movie 8 Mile, could easily be seen as an examination of success and ambition. No matter what subject Eminem chooses to write about, he usually makes it either incredibly shocking, cleverly humorous, or deeply personal. No matter which route he takes, he throws his talent into every one of his lyrics.